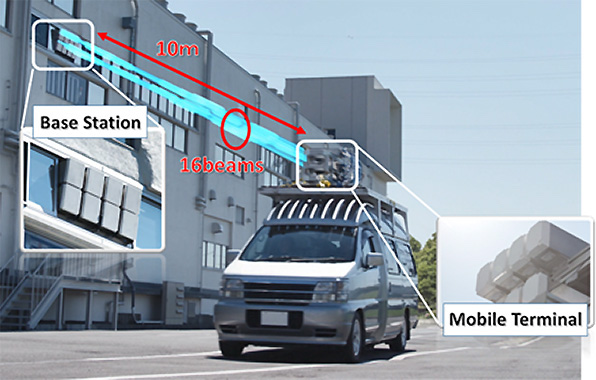 NTT Docomo and Mitsubishi Electric said they achieved peak data speeds of more than 20Gb/s over short distances in proof-of-concept 5G trials using a single mobile terminal and 500MHz of spectrum in the 28GHz band.

In a statement the companies said the outdoor field trials in Japan reached downlink data rates of 27Gb/s and 25Gb/s over distances of 10m and 100m, respectively. They claimed the results are the world’s first 5G transmission to a mobile terminal exceeding a peak data rate of 20Gb/s.

The tests claimed to verify the feasibility of 16-beam spatial multiplexing in line-of-sight conditions, where massive-element base-station antennas on the wall of a building directed beams to mobile-terminal antennas installed on the rooftop of a vehicle.

Japan’s three major mobile operators are working toward launching limited commercial 5G services in 2019, with pilots scheduled to take place at the Rugby World Cup being held in the country next September. Previously, the country’s operators had touted the 2020 Summer Olympics in Tokyo as a major proving ground. Representative from NTT Docomo, KDDI and SoftBank told a government hearing last month that limited commercial launches would take place in 2019, ahead of a full 5G service for smartphones in 2020.

Subscribe to our daily newsletter Back
Previous ArticleFeature: Connecting the Next Billion
Next ArticleTelstra claims first live 5G data call in Australia