Baidu, China’s most popular search engine, formed a broad alliance with more than 50 automotive and tech companies to transform its Apollo self-driving car platform into a global initiative.

The alliance includes big names in the auto industry such as Continental, Daimler, Delphi, Ford and Robert Bosch, as well as Intel, Microsoft, Nvidia and mapping company TomTom.

The Apollo autopilot software, which is being developed at Baidu’s R&D facilities in California, is in direct competition with Alphabet’s Waymo self-driving initiative.

Gu Weihao, GM of Baidu Intelligent Vehicle, said in June the company opened up a number of its driving datasets, including HD maps and imagery, to partners to speed development of autonomous vehicles.

However, Gu (pictured below) noted it is insufficient only to open the data. As a result, the company also plans to offer partners access to its Apollo autopilot software. 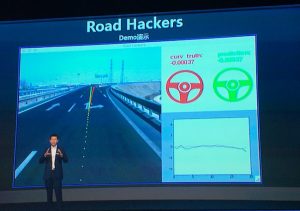 E-commerce giant Alibaba and state-owned car maker SAIC Motors introduced an internet enabled car in mid-2016. The two companies agreed to partner in 2014, with cars built by SAIC to be powered by Alibaba’s Yun operating system and its GPS and its cloud computing service.

Rival Tencent acquired a 5 per cent stake in US electric car manufacturer Tesla in March for $1.8 billion: a move with the potential to boost Tencent’s presence in the connected car sector.