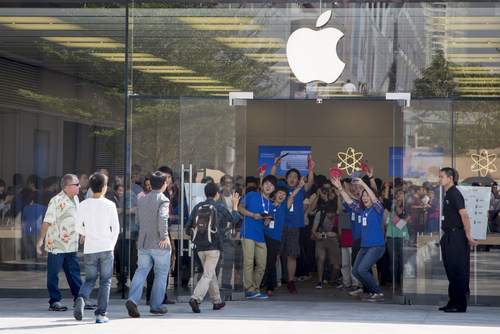 China was once again the weak spot for Apple, with revenue in greater China dropping 14 per cent to $10.8 billion in the company’s fiscal Q2 ending 31 March.

Apple doesn’t break down iPhone sales by region, but given its Mac and services divisions both had double-digit revenue growth during the March quarter, its smartphone sales in the region certainly took a hit last quarter.

First half revenue in greater China was down 13 per cent year-over-year, about a third of which was attributable to forex changes, compared with a 32 per cent revenue decline in the second half of last year.

“We’ll improve a bit more during this current quarter, not back to growth, but improve. We continue to believe that there’s an enormous opportunity there. And in the scheme of things, our business is pretty large there,” he said. “We continue to be very enthusiastic about our opportunity in China.”

Rising revenues
Cook said Apple had strong results from its retail stores in mainland China during its fiscal Q2, with total store revenue up 27 per cent year-on-year. He noted its performance continued to be weak in Hong Kong, which was hit as the tourism market continues to slump.

Cook said Apple set a new March quarter record for India, where revenue grew by strong double digits. “We continue to strengthen our local presence across the entire ecosystem, and we’re very optimistic about our future in this remarkable country with its very large, young, and tech-savvy population, fast-growing economy, and improving 4G network infrastructure.”

The CEO said it doesn’t forecast iPhone sales by geographic region when asked about its target for India for the full fiscal year. “We have a ton of energy going into the country on a number of fronts. We believe that there is a huge opportunity for Apple there.”

The greatest gains came from Asia Pacific (excluding China and Japan) and the US.