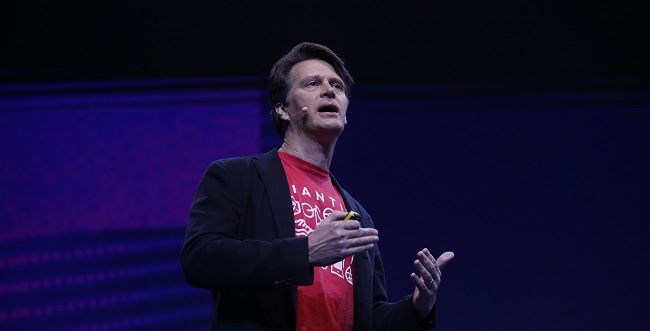 Panellists offered differing views on the potential of 5G, with Niantic co-founder John Hanke (pictured) stating it is key to the company’s future, while Groupon chief Rich Williams dismissed the technology, insisting it won’t be a game changer.

In today’s second keynote, Williams argued that for the business and retail sector, the real disruption came with smartphones and apps, as he questioned 5G’s future impact.

“I’ve seen 5G mentioned everywhere at the show but no one can explain to me what it means,” he said.

Williams added that, in his sector, it is more important to build a seamless experience, connecting more deeply with customers on a daily basis, and finding the right “enabler” whether that’s machine learning, AR, VR, chatbots or virtual assistants.

5G the AR future
Also speaking, Hanke said the company has already pushed LTE networks to their maximum with its AR games and 5G is now key to the company and the technology’s future.

“We are here because we are excited about 5G… We need 5G to deliver the kinds of experiences we want to offer,” Hanke said at Tuesday’s second keynote.

The company behind the Pokemon Go phenomenon said its mission is to bring people closer together and for this reason it holds events which can sometimes be attended by 100,000 people in one tight space, all playing games that put a big strain on networks – something 4G wasn’t designed for.

And that’s not the only reason it needs 5G. It recently demoed a “real-time multi player augmented reality” game called Codename: Neon, where all players are being tracked and their position is then shared with other players.

“All their actions are being shared and this is a demonstration of the kinds of AR experiences we want to build,” adding that mobile edge computing is also essential.

“Yes, 5G has been hyped but this is one of those paradigm changes that happens once a decade or every couple of decades,” he added.

In the keynote, Citi President James Forese then addressed local partnerships, which he said are key to bringing financial services to the 1.7 billion people in this world who are unbanked.

“The banking industry has suffered a break in trust… we have issues reaching communities, they are distrustful of institutions,” he said, adding the company had issues reaching areas even in countries where it has operated for years.