The rise of the Angry Birds - Mobile World Live

The rise of the Angry Birds - Mobile World Live

The rise of the Angry Birds 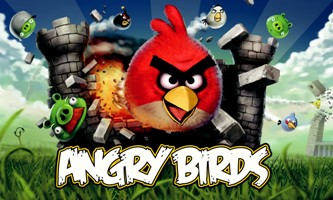 In mobile gaming, 2010 has undoubtedly been the year of Angry Birds. Created by Finnish software development house Rovio, the title has managed to achieve something that many competing products have not: impressive sales on a paid basis, alongside massive downloads for the trial, ‘lite’ version. The paid-for game has been purchased more than 7 million times, with the lite version downloaded 13 million times, which Mikael Hed, CEO of Rovio (pictured, below), said reflects the mass appeal of the game: “Most players will be wanting for more content after having played the lite version.”

According to research from Distimo, during the third quarter of 2010 Angry Birds was the most popular paid-for iPhone app (costing US$0.99) and the second most popular paid-for iPad app (Angry Birds HD, US$4.99). It was also in the WebOS paid-for top ten (priced at US$1.99), where it achieved more than 23,000 downloads in just over one month on sale. The game recently launched for Android, racking up almost 100,000 downloads within a few hours of availability.

While Angry Birds has been a breakout success for Rovio, the company is no flash-in-the-plan. It has its roots in a 2003 app competition sponsored by HP and Nokia, which led to what is claimed to be “the first commercial real-time multiplayer mobile game in the world.” Initially called Relude, in January 2005 the company received its first round of funding from a “business angel,” adopted the Rovio Mobile name, and transformed itself into a “fully fledged developer and publisher of 2D Java games.” A subsequent acquisition added 3D product creation to its portfolio.

At the heart of Rovio is a games studio which has created products for “some of the biggest names in the mobile space,” including Electronic Arts, Nokia, Vivendi, Namco Bandai and Mr Goodliving/Real Networks. The company says that it offers “a one-stop bespoke development solution from design through to porting,” as well as the creation of marketing material including trailers, posters and viral Flash games. It says it has created a proprietary technical platform, “extensive in-house tool chain,” and “transparent, iterative design process”.

Hed says that this gun-for-hire work enabled the company to create Angry Birds without any need for outside funding: “The game was developed on spare time left over from those projects,” he says.

Getting it right first time
According to Hed, the driver for the success of Angry Birds has been the “relentless social media buzz,” which has helped it stand-out from the raft of other mobile games products available for iOS and other platforms. “Getting featured in the app stores is important, but it does not guarantee automatic success. Working together with great brands helps, as does having a tremendous product. At the end of the day, being phenomenally successful puts you in the news and generates increasingly more interest and more publicity,” he says.

Again, however, Rovio’s success is based on solid groundwork. “From our point of view, to create a successful mobile game, you need to study your market enough to be able to create a product that gets every aspect right on the first time,” Hed says. “We have done our homework regarding different aspects of going to the market. Our games combine the art of making games with the business analysis in the correct measure.”

But developing products that achieve the level of success of Angry Birds is no easy task, as many developers will attest, especially due to the low price of competing products offered by app stores. “The lower price point does indeed mean that developers need to grapple with the challenge of creating products with massive universal appeal. Then the low price attracts impulse buyers and helps to sell the game in massive volumes,” Hed says.

Driving growth across platforms
In order to enable continued growth for Angry Birds beyond the iPhone user base, the title has been made available for platforms including Nokia’s Maemo (for the N900), Symbian^3, HP/Palm’s webOS and now Android. In addition to its work with smartphones, a PlayStation minis version has been announced by Chillingo, a Rovio distribution partner, and a version for Nintendo DS is also said to be in the pipeline.

According to Hed, there are a number of considerations when creating different versions of an app for different device operating systems: “The main thing is to utilise the strengths of the platform and to adjust the game so that it will give the optimum experience. The core game experience is always the main focus, the games do not need to be exact copies of each other on different platforms.”

While the free lite and paid-for full model has been successful with iOS, the company is also embracing new business models for its work on other platforms. It was announced at Nokia World 2010 that the version for Symbian^3 will be Rovio’s first to support in-app purchases, while the release of Angry Birds for Android has seen an ad-funded model used, although a paid-for version without ads is expected in the near future.

While fragmentation in the device platform industry has been identified as a challenge for many app developers, Rovio’s broad experience in developing contract apps as well as its own titles puts it in a strong position to deliver cross-platform gaming products. “All the major smartphones have a significant user base, and the performance to run our games. We have a strong background and knowledge in porting games for different software and hardware platforms, and we can perform it with a certain level of ease. Some of our competitors may find it more difficult,” Hed says. “The roots of Rovio are deep in the Java/BREW world, where device fragmentation was massive. Different app stores are an opportunity.”

Perhaps a more surprising claim, originating from entertainment magazine Variety, is that Rovio is in talks with the US entertainment industry to extend the Angry Birds franchise beyond mobile gaming, with a film a possibility. A number of Angry Bird soft toys are expected. According to Hed: “We have created an entertainment brand, which we intend to develop into a long-lasting one. Our largest opportunities right now lie in diversifying our entertainment franchise.”