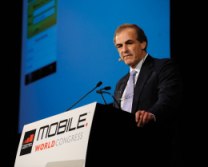 “For example, Apple and Samsung’s bada won’t go away, and we’ll have to work them,” said Bradlow. “We don’t see the growing number of available app stores or mobile OS’ as fragmentation, but as competition. I believe there will still be at least six to 10 mobile OS offerings on the market in the coming years.”

The problem with supporting numerous OS’, according to Bradlow, falls more on the applications developer community by forcing them into testing their software on up to 1,000 different handsets to ensure compatibility. “Developers are still struggling with the handset environment.”

Turning to how Telstra would offer applications to its customer base, Bradlow said the company planned to position itself as a ‘shopping centre’ where subscribers browse through a selection of store fronts and select apps which are supported on their handset. “We will build the shopping centre environment, which means we won’t be bypassed in the value chain.”

Bradlow’s comments are topical in light of Monday’s announcement whereby at least 24 operators around the world are to join forces to launch an open international applications platform, marking the largest unified move to date by the operator community into the mobile apps space. Telstra is not believed to have signed up to the Wholesale Applications Community so far.

Commenting on the revenue potential of downloadable apps, the Telstra exec said that consumers were willing to pay between US$1 and US$3 per download, not the US$30 to US$50 that some developers are attempting to achieve. “We only want a reasonable share of this app revenue, but it would still be big business for us as the customer will need to have subscribed to a data plan to access the service.”

Also speaking at the conference session was Ho Soo Lee, VP, media solutions centre, digital media and communications division, Samsung. “The ecosystem for app stores is very complicated with the involvement of so many stakeholders. But the app store business is only just starting and will settle down. Developers will then be able to recover their investment as consumers pay for more downloads.”

Returning to the issue of fragmentation, the GSMA’s CMO, Michael O’Hara, said that there had to be a better way than creating proprietary ‘app store islands’ – as seen with the iPhone. “We must establish a common applications framework to eliminate these islands. The present 70/30 revenue split between the app developer and Apple is compelling for both sides, but not the operator.”

According to O’Hara, while there was a need to build a revenue share model to support the entire ecosystem, the most important requirement was to make apps portable across smartphones from a wide variety of vendors. “We should reflect back on the success of GSM which was driven by the adoption of an open and international approach.”

Previous ArticleJoin CGAP for a virtual conference on Microfinance & Mobile Banking: September 8 and 9
Next ArticleIntel To Infineon and beyond!