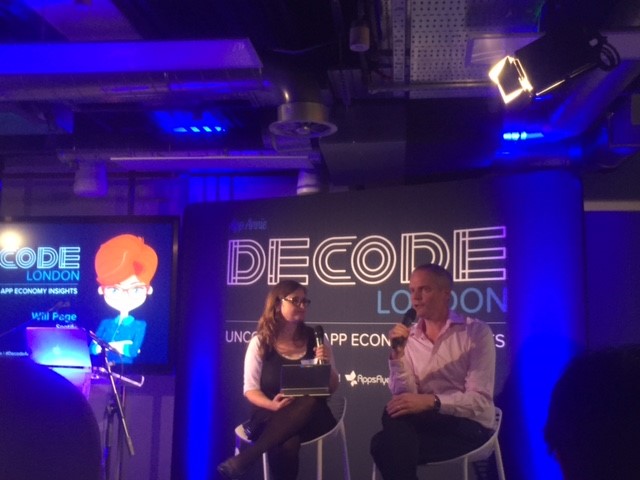 Spotify was surprised by the success of its Discover Weekly feature – 40 million people regularly use it – the company’s director of economics revealed.

At App Annie’s Decode event in London this week, he shed light on how the music streaming app maker has “lifted the lid on how music is consumed”.

“We used to have a purely transaction based industry where listeners purchased music but there was no information on what they did with it – did they listen to the whole CD, or just particular songs?” said Will Page (pictured, right).

Spotify managed to gather analytics on listening habits of users, and believes it has achieved its mission because the music industry is growing at its fastest rate since 1999.

Page noted that the Discover Weekly feature in particular – through which nearly 5 billion tracks have been streamed since its launch in July 2015 – was providing a “treasure trove of analytics”.

The feature works by creating personalised playlists for users every Monday, based on their listening habits.

Spotify found that Monday worked because it was the start of the week, giving users something to look forward to. It came after the less successful Throwback Thursday and Feel Good Friday.

The app maker learned that people became less reliant on their own judgement for what to listen to and more on the app, mainly because they want to find new music but don’t have the time and are happy to outsource the task.

The success of the feature also shows that users don’t mind an app learning about their habits if it will benefit them: “Users do wonder how the app knows them so well, but in a good way,” said Page.

Family plan
Discover Weekly also drove up demand for its $14.99 family plan – parents often found their recommendations were being “polluted” by what their kids were listening to and preferred paying extra for them to have separate accounts.

Page also said one of the best ways to improve the user experience of an app is to regularly see the complaints that come in.

This thought was echoed by App Annie CEO Bertrand Schmitt, who also recommended looking at user reviews and ratings, as well as monitoring the overall app performance and reacting quickly to new trends.

He stressed the important of identifying new markets and growth opportunities, as well as pinpointing key milestones that influence the perception of not just a developer’s own app but of competitors too.

Answering a question about app fatigue, he said he believes native apps provide the best user experience and he doesn’t think data – such as the fact that time spent in apps is estimated to be 51 minutes every hour – supports the concept.