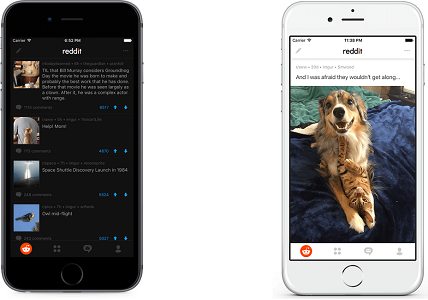 The company launched apps for iOS and Android, with the iOS version replacing an alternative (Alien Blue, acquired in 2014) as the official mobile channel for the platform. According to The Verge, the apps have been in beta for some time, but are now available for download in Australia, Canada, UK and US, with more markets to follow.

In a Reddit post, Alex Le, VP of consumer product for Reddit, said that its initial efforts were focused on creating the company’s first Android app, and stabilising Alien Blue. But the latter “turned into a much larger effort”, meaning a ground-up rebuild became the better option.

TechCrunch reported that 50 per cent of users now browse Reddit on mobile through browsers or third-party apps, making full mobile support a priority for the company.

Shortly after the launch, a number of third-party Reddit apps were pulled from Apple’s App Store. This raised some eyebrows because the official app, as well as Alien Blue, did not appear affected.

However, it was subsequently revealed that the issue was related to the management of adult content, which falls foul of Apple’s terms and conditions. A switch which enabled users to access so-called “Not Safe For Work” content was the issue, and removing this saw apps returned to the store – however this setting can still be managed for user accounts via the Reddit website.

Reddit itself said it has not looked to block third-party apps following the launch of its official products.