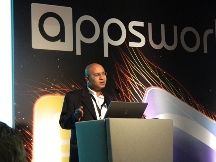 LIVE FROM APPS WORLD LONDON: Suresh Jayaraju, VP and head of New Age VAS for Indian operator Reliance Communications, noted that operators face significant challenges in capitalising on the mobile app opportunity, due to their structure and focus being on legacy business models.

In his presentation, Jayaraju (pictured) argued: “Typically, if you compare a telco with, say, Google or Apple, telcos have been built for the processes of delivering voice. And they have been very, very good at delivering voice. But in terms of apps, or developing and deploying technology products, I don’t think that they are really very capable. They are very hierarchical in nature, if you want to get a product out there are multiple business process, commercial processes.”

As an example of this, the executive noted that the way in which operators are geared-up to measure their success contrasts with the way an app business is monetised over time. “Android Market is based on an advertising-centric model, where the revenue will grow over a period of years. That kind of leeway, I don’t think an operator has. Typically, the KPIs of the value added services teams within an operator are oriented on quarter-on-quarter revenue goals, which don’t fit in here,” he said.

Jayaraju said that unlike more capital-intensive value added services, apps “are based on a democratic parameter that virtually anyone sitting in a small shop with a couple of hundred dollars in his pocket can create an app.”  This contrasts with the previous process of bringing a product to market in partnership with an operator, which “requires you first to meet up with several line managers, pitch your product, ask them to take it to market, promote it, and then it rests on the value they place on it.”

In order to secure a position in the value chain, operators should focus on providing a “gateway” toward products and services offered by partners. “What we control and what we own is the consumer access gateway, and that is the area where we can build a play, and ensure that the consumer gets the best possible access to the best possible products,” he said. “That’s the point where we can cross-sell and upsell, and in the process do carrier billing, sell multiple other products and services.”

While one of the key assets operators are perceived as having is a billing relationship with the customer, Reliance’s experience indicates that this alone is not a guarantee of success. “By the way, we have done carrier billing with Nokia Ovi, which is by far the largest installed base of smartphones in India, and I don’t think we have seen a very huge trend in terms of downloads. People are still going to Android, and people are downloading free applications,” the executive said.

Jayaraju noted that, previously, operator app stores had seen “very, very muted success,” for numerous reasons. This has included the fact they have largely consisted of WAP portals which offer apps, and have not offer the same level of integration with the handset as competing stores from platform providers. “The UI can never look as good, the key device features can never be tightly integrated like the device-based stores,” he said.

It was also noted that the companies behind some operator app stores have not focused their attentions on the needs of consumers. “They don’t align with the customer interest, they align very tightly with the operator. And that is not very good for the end consumer.”

The Reliance executive also noted that the emergence of third-party app stores forced operators to revamp their revenue share models, to favour content providers rather than the operators – which previously had sole control over the channels to consumers.  “Otherwise, there would be a migration from people providing services directly to the operator, to providing services through Android Market or Nokia Ovi Store,” he said.