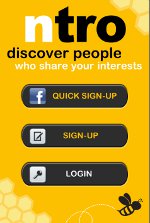 Los Angeles-based start-up nProgress has launched its ntro social discovery app, following the injection of US$1.7 million of angel funding. ntro is a free Android or iPhone app which allows users to discover interesting connections with people around them.

The app works by introducing users to nearby individuals who share interests – as defined by the users – which could lead to anything from making new friends to striking business deals. Interests could include being a tech entrepreneur or a fan of cult films or simply having mutual friends. The app doesn’t share precise location data or personal information such as email or surname.

ntro will initially launch in Los Angeles and the San Francisco Bay Area, with other cities likely to follow. The launch follows a pilot with students at the University of California San Francisco and UC Berkeley in which they could use the app to connect to other students.

Los Angeles-based investors provided the funding for the company. “As a Los Angeles-based start-up, we’re proud to have raised most of our first round from L.A. investors,” nProgress founder and CEO Josh Resnick said.