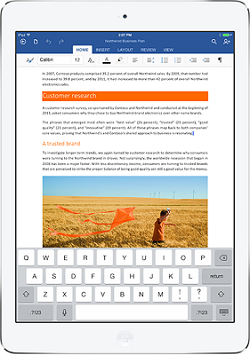 Microsoft announced the long-anticipated launch of its Office productivity apps for the iPad, which have been built from the ground up “factoring in the unique nature of touch and functionality” of the Apple tablet.

Office 365 subscribers can create and edit documents with iPad versions of Word, PowerPoint and Excel, which can be downloaded for free from Apple’s App Store. The apps also include access to the OneDrive cloud-based storage to sync documents across devices and are available in 29 languages.

The free versions of the apps will only allow users to view Word, PowerPoint and Excel documents created on another device.

Microsoft also made the Office Mobile apps for the iPhone and Android smartphones free to use. The technology was launched for the iPhone in June last year but only for Office 365 subscribers.

According to Flurry’s research for the January to March 2014 period, consumers are spending 119 per cent more time using productivity apps than they did a year ago. This growth rate eclipsed other categories such as messaging, games and news.

A Morgan Stanley analyst said in February last year that Microsoft is losing out on “billions” in revenue by not offering a paid version of Office for the iPad.

Previous ArticleMWC14 Keynote: Shhmooze
Next ArticleFacebook unveils plans to “beam internet to people from the sky”

Microsoft shakes up To Do organiser