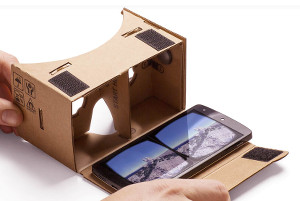 More than 5 million “moments” have already been captured with Cardboard Camera on Android, Google said.

It is possible to explore images in all directions, and hear sound recorded while the photo was taken “to hear the moment exactly as it happened”.

Images are captured by users holding phones vertically, tapping record, and then turning around as though taking a panorama.

Users also have the option of selecting multiple photos to create a virtual photo album, which can be shared via a web link.