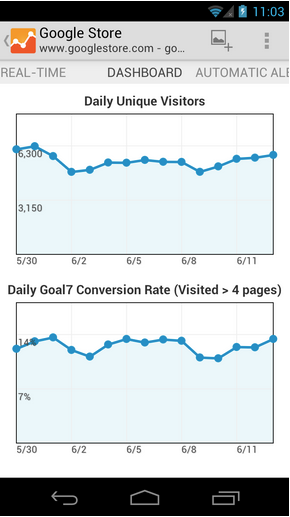 Google announced the beta release of its Mobile App Analytics tools, which it said “help marketers and developers better measure their mobile apps.”

According to the company, the tools enable Android developers to monitor acquisition and user metrics such as downloads and new users; engagement metrics including retention, crashes and conversions; and outcome metrics such as app sales and in-app purchases.

In a blog post, the search engine giant noted: “the reports are tailored for mobile app developers and marketers, speaking the language that matters to them. They are designed to measure the entire mobile customer journey – from discovery to download to engagement.”

Google is opening the service to “whitelisted users in waves,” and has invited interested parties to sign up. It anticipates the reports will be available to all Google Analytics users by the end of the summer.

Supporting the launch, Google also made available a Google Analytics App for Android phones (pictured), providing access to data in a format optimised for mobile devices.