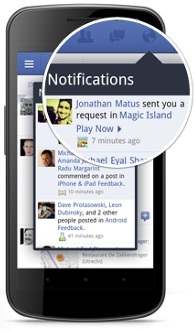 Facebook announced the extension of its social app discovery features to the Android platform, following on from its earlier availability on iOS and mobile web. In a blog post, the company noted that “users and their friends can now spread the word about your app and engage in social experiences within your app, regardless of what devices or platforms they are using.”

With the introduction of Facebook for Android 1.8, customers will be able to discover apps via requests, bookmarks, news feeds, and search. Developers can also “acquire, engage and monetise” users with authenticated referrals and Facebook Credits.

The company said that since launching its Facebook Platform on Mobile, it sees this “driving strong growth to mobile app developers,” quoting the example of Snap Interactive, which experienced a 70 percent growth in daily user logins to their iPhone app shortly after introducing new features.

As with mobile web apps, Android developers wanting to use Facebook Credits must adopt this as their exclusive payment mechanism – a feature which meant this option is unavailable to iOS developers.