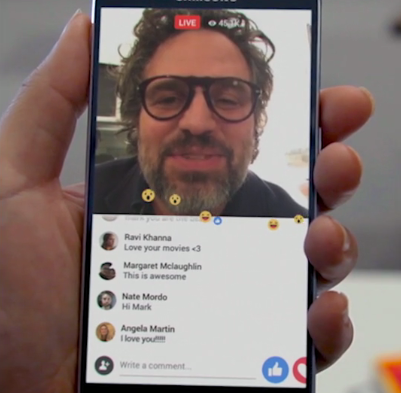 Facebook announced new features for its Live service, giving users more ways to personalise their broadcasts, in a move that pits it against Periscope, Twitter’s live streaming app.

Facebook Live was introduced last summer to public figures via the Mentions app and more recently to users in the US. Now, it is being rolled out to around 60 countries.

Users will be able to “go live” within Facebook Groups and Facebook Events, so they can broadcast to people in a particular group or guests of a particular event, as well as schedule a live Q&A session.

Facebook may be willing to pay celebrities to broadcast via the service, and the Live button is replacing the Messenger button in its core app, according to The Wall Street Journal (WSJ).

To make the service more “interactive and fun” it now includes options for live reactions, replaying comments made while live and five live filters.

Live reactions appear in real time and disappear quickly so broadcasters and viewers can get a sense of how people are feeling at different points during the live video, “like hearing the crowd applaud and cheer”.

Broadcasters can engage with those leaving comments and respond to their suggestions and questions.

“From initial data, we’ve seen that people comment more than ten times more on Facebook Live videos than on regular videos. We want people watching the broadcast after the fact to feel “in” on the action. To achieve this, we will replay comments as they happened during the live broadcast when people watch it later,” the social media giant said in a blog post.

It is also working on adding the ability to draw or doodle on a live video and there will be a dedicated place on Facebook’s app to discover live videos that are trending.

These features will be rolling out on iOS and Android over the coming weeks.

“Currently, there aren’t any ads on live video. Step one is to get people comfortably hooked. Then comes tweaking the experience, and later monetisation,” the WSJ report said.

As for Periscope,  in the one year since it launched, more than 200 million broadcasts were created on it.

In January, it became possible for users to view live Periscope streams directly within the Twitter app, instead of users being redirected to the Periscope app.