Don’t make bots just because they are trendy, say experts 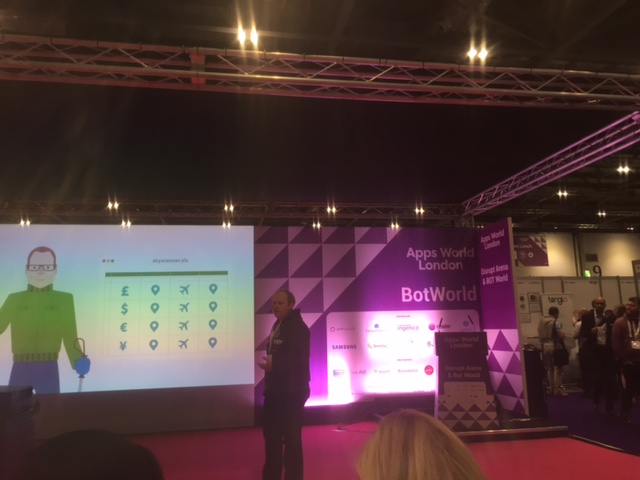 LIVE FROM APPS WORLD, LONDON: This was the first year the Apps World event had a dedicated bots section, where experts discussed the dos and don’ts of developing bots, as well as some successful use cases.

Skyscanner – don’t develop bots blindly
Rather than “blindly follow fashion” and make a bot because everyone else is, developers must ask themselves some crucial questions, such as if they can really improve user experience, said Skyscanner’s David Low.

A developer advocate at the flight comparison app maker, Low said: “Try and imagine the impact of the bot – what does it offer the user, how does it improve user experience – is an app or a website still better?”.

Consider chat bots as an alternative to apps and web, and not for fashion but for function, he said, adding that sometimes a conversation will help a user get from point A to B much faster than clicking or tapping – but not always.

Users clearly like to talk via text – the top ranking apps globally in terms of time spent are almost always messaging apps – but this doesn’t mean a conversation format is best for all services.

Bot developers must ensure their product does not end up the way so many “zombie apps” do – 90 per cent of apps just sit in app stores, never downloaded.

Getting in early is, of course, key. SkyScanner has 40 million downloads and Low credits part of this to the fact that it was one of the first in the industry to create a service that curated flights and fares from all over the internet.

Lastly, his advice was to always expected the unexpected. Users often ask Skyscanner’s bot if they can travel with their dog, not something it is meant to answer. Other odd questions were related to users asking for help finding lost keys and wanting to know where to travel for “big strong muscle men”.

The bot should be equipped to steer the conversation back to its core function.

Sage – bots should not be too human-like
Kriti Sharma, director, bots, at Sage, and Tom Hewitson, conversation designer, have created a community called Messaging Bots London. 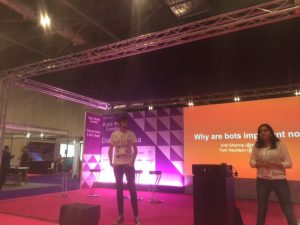 Their bot, Pegg, is the world’s first accounting chatbot made to convince small businesses and freelances who used pen and paper or spreadsheets to manage their accounts to use a bot instead.

Users can say “spent £2 on post-it notes at Tesco” to enter expenses and can ask questions like “how much money did I make last year in July?” or “who is my best customer?”

Entrepreneurs in over 85 countries have adopted the bot.

Hewitson said his self-given title means he is a copywriter as well as a  product designer and that writing scripts for bots is a new job that is likely to be in demand.

His number one advice is first to work on the functionality and then give a bot a personality, but not that of a human as this is “setting yourself up for failure”.

Instead, developers should go with a brand name or a cartoon character. Its personality should depend on the function it executes and the user base.

He wanted Pegg to have the personality of someone startups would consider their ideal personal assistant. He described its personality as “very friendly and approachable. Sometimes zany”.

Sharma added that a bot should in the first instance set an expectation for what it can and can’t do.

Sharma added that some of the most dull, boring administrative functions can be the best use cases for bots.

KLM – mixing bots with AI
KLM’s chatbot on Messenger is another example of a successful use case. It was the first airline to launch its bot back in March, and has to date sent more than 1.7 million messages and reached 500,000 customers.

However, KLM believes it has gone “beyond bots” by making use of bots technology – standalone conversation machines, pushing boarding passes and flight status updates with no human involvement – and mixing it with artificial intelligence.

Its AI uses smart data to learn and improve, support agents with suggested answers and use data collected on the customer to give a personal, fast and correct answer.

KLM believes this model is working for it, but Lee said when it comes to customer service, humans will never completely be replaced by bots.