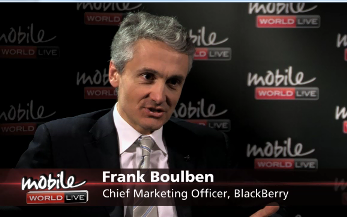 VIDEO INTERVIEW: BlackBerry is set to surpass 100,000 apps for its BB10 platform this month as momentum for its ‘make-or-break’ next-generation OS grows, according to the company’s CMO, Frank Boulben.

Speaking exclusively to Mobile World Live at the end of February, Boulben said:“We are the platform coming to market with the highest number of apps because we launched on 30 January with more than 70,000 applications. By next month we will have crossed the 100,000 milestone.”

He added that there is significant interest from developers, with the series of BlackBerry Jam events around the world driving “increased momentum in the developer community”.

He also noted that developers are responding to the fact the company decided to stick with its approach of developing its own mobile platform (rather than adopting Android or Windows Phone). “When they see the reception of the platform they want to develop more native apps, take full advantage of the user interface,” he claimed.

You can see the full interview with Boulben here.

Previous ArticleFoursquare BB10 app gets up to speed
Next ArticleMWC13 Keynote: Viber CEO