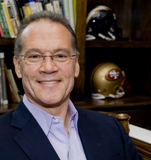 Ahead of his appearance at Congress Wednesday, AT&T’s chief technology officer, John Donovan, told Show Daily of the challenges the operator faces in attempting to ensure its network is up to the task of handling the boom in data consumption.

“We’re seeing advanced smartphones like the iPhone driving up to 10 times the amount of usage of other devices on average,” he reflected. “In fact, about 40 percent of our customer base uses a smartphone today. Overall, wireless data traffic on the AT&T network has grown more than 5,000 percent over the past three years. As more and more advanced smartphones, PDAs and other devices are introduced, we see this usage trend continuing in the years to come.”

AT&T has faced strong criticism in recent months over the performance of its data network, but is taking steps to reduce congestion. “The key to addressing this is backhaul and the simple reality is that wireless network equipment is just catching up to supporting the high-capacity backhaul needed to stay ahead of the growth we’re now seeing in mobile broadband use,” said Donovan. “This equipment challenge is an industry-wide issue.”

The second-largest US operator recently implemented a software upgrade to HSPA 7.2 technology and is conducting an aggressive deployment of fibre-optic backhaul – three times its 2009 fibre deployment – to support faster speeds. “We expect more than half of our mobile broadband traffic to be riding on fibre-based backhaul connections by the end of the year,” said the CTO. “We’re also adding roughly 2,000 new cell sites to the network this year while adding new radio controllers and carriers at a pace that doubles our 2009 deployment.”

Donovan reiterated the operator’s plans to move directly from HSPA 7.2 to LTE, with commercial deployment of LTE networks expected next year (in partnership with vendors Alcatel-Lucent and Ericsson).

“Now that Ethernet-compatible wireless network equipment is widely available, we are deploying thousands of new high-speed backhaul connections, and we’ve already announced plans to deploy thousands more in preparation for faster 3G and LTE,” he added. “This will play a significant role in easing data traffic and congestion.”

Donovan also hinted that the operator may move away from flat-rate ‘all-you-can-eat’ packages as the industry continues to see huge growth in devices, apps, users and data traffic: “Eventually, there needs to be a model that addresses the limited spectrum issue and supports continued growth in mobile broadband usage, innovation and investment.”

Donovan is speaking at Wednesday afternoon’s ‘Network Breaking Point’ conference session. Solutions to the problem of overloaded data networks are expected to be hot topics at this year’s Mobile World Congress, and include technology such as femtocells and WiFi handoff. Indeed, sources have told Show Daily that AT&T has carried out 3G offload WiFi deployments with BelAir Networks, although the US operator did not confirm this by time of press.