Facebook CEO Mark Zuckerberg trumpeted the importance of augmented reality (AR) in a keynote at the company’s F8 developer conference, where it also announced a VR social media app and Messenger 2.0

Facebook launched the ‘Camera Effects Platform’, which includes Frames Studio and AR Studio and gives developers the ability to build AR tools for the camera such as photo frames, interactive effects and masks. Developers will also have access to hand tracking and body skeletal tracking tools.

In the examples Zuckerberg showed on stage, users could add effects like steam coming out of their coffee mug, or a rain cloud watering a plant. These effects look very similar to the 3D objects feature Snapchat announced earlier this week.

He also said a whole new genre of AR games are coming, as is AR street art, where users will point their screens to an empty wall and see art that would normally not be possible in the physical world, such as a waterfall of paint.

The CEO clarified it will take time before all this will become a reality: “User experiences won’t dramatically change overnight”.

Natural social platform
Facebook Spaces (pictured, below), launched in beta for Oculus Rift, is a VR app where users “hang out with friends in a fun, interactive virtual environment as if you were in the same room.” A glimpse of this technology was shown at F8 last year. 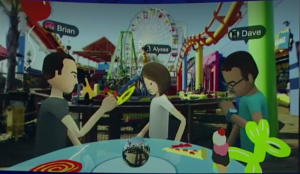 Users can view Facebook content with friends in VR, including 360-degree videos and photos. They can draw in the air with a virtual marker, phone a friend in the real world with Messenger video calling and take selfies. A maximum of three avatars can be in one space.

The app uses machine learning to suggest options for an avatar based on a user’s Facebook photos.

Rachel Franklin, head of social VR, said “VR gives us a magical sense of presence” and is a “naturally social platform” which “lets your humanity shine through”.

She also believes a VR social media platform is “more natural, seamless and more interactive than anything ever before”.

Users can have virtual game nights, or a virtual boom box playing personalised playlists, she explained, adding: “We are going to let developers build on this platform, we’ve only just scratched the surface.”

Version 2.0 offers chat extensions enabling users to add a bot directly into a group chat. Marcus said music will be big in Messenger, with a feature allowing users to share tracks from Spotify directly in a chat, and compatibility with Apple Music coming soon.

A new artificial assistant for Messenger, M, now offers the ability to order food through delivery.com. When users are chatting with friends about what to get for dinner, M will suggest placing an order. The whole experience can be completed in Messenger, including group ordering and payment.

Aimed at small businesses, an offering called ‘Smart Replies’ will automatically respond to a user if they have a commonly asked query.

The Messenger Platform accrued more than 1.2 billion monthly active users, 100,000 developers and 100,000 monthly active bots since its debut. The company also revealed 2 billion messages are sent between people and businesses every month.

It launched ‘Places Graph’, which provides free access to data on more than 140 million places around the world. App makers can use this data to create location-aware experiences which help people learn more about where they are.