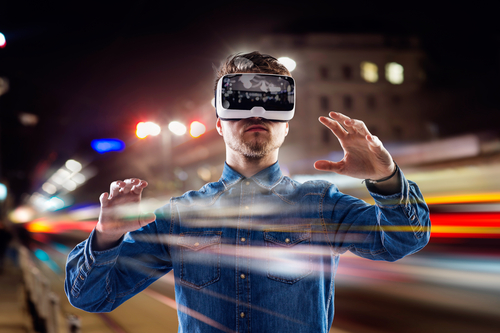 In a report, the app data and insight company said the pace of overall VR app downloads across the two platforms showed no sign of abating in the opening months of 2017. App Store and Google Play VR app downloads in Q1 totalled more than 85 million worldwide, a 205 per cent increase on Q1 2016, it revealed.

The cumulative worldwide download figure was approximately 371 million between January 2015 and March 2017, with 106 million downloads coming from the App Store and 265 million from Google Play, the report said.

Through 2016, VR app downloads showed sequential rises in each quarter, culminating in combined downloads of 108.5 million from the two stores in Q4 2016, an increase of 411 per cent year-over-year, the study observed.

The majority of mobile VR downloads occurred in December, which could have been linked to the November launch of Google’s Daydream headset for Android devices. December also saw the creation of the Global Virtual Reality Association, a non-profit organisation formed by companies including Facebook’s Oculus, Google, Acer Starbreeze, HTC Vive, Samsung and Sony Interactive Entertainment to promote VR.

Sensor Tower reported worldwide downloads of VR apps on Google Play grew 424 per cent year-on-year in December to about 38 million, and increased 727 per cent on the App Store to around 21 million.

Categories
Games represented the single largest category of VR app downloads during the 2015 to 2017 periods studied, accounting for about 56 per cent of all installs. (see chart below, click to enlarge). 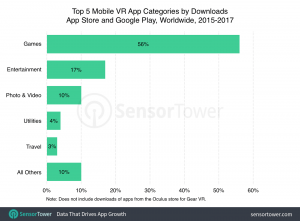 Entertainment apps comprised the second-largest category of VR app downloads at 17 per cent, followed by photo and video, utilities and travel.

Nelson said support from developers willing to create rich experiences, and marketing from Google around its Daydream platform will help the VR industry.

“Of course, there’s always the chance that Apple will throw its hat into the (already crowded) ring with a first-party VR solution of its own, which would dramatically increase consumer interest,” he said, although he believes the manufacturer is focused more on on augmented (or mixed) reality.

He was referring to a report Apple CEO Tim Cook sees augmented reality as the next big thing.

However, Cook’s view does not mean Apple is not paying heed to VR. In January 2016 the company hired David Bowman, a leading VR researcher.

There are many indications AR and VR will each play a big role in apps. In February, app-builder Appy Pie added AR and VR features to its platform, so businesses can integrate immersive technology into their apps.

Meanwhile, HTC Vive made good on a pledge to launch a subscription VR app store service in early 2017, and revealed pricing for the facility.