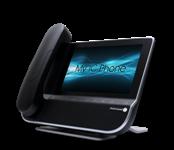 Alcatel-Lucent has made available a software developer’s kit (SDK) for its My IC Phone, a touch-screen desktop phone for enterprise users, supported by a developer portal which is expected to launch worldwide in November. It says that the launches are “aimed at supporting the rapid growth of an open application development system for enterprises.” The company says that My IC Phone “ushers in a new era of applications and sophistication never before seen in a desktop phone, redefining what users can do from their desk” – it offers “an open platform for communications and applications, and an entirely new user interface based on a large multi-touch display.”

Alcatel-Lucent says the SDK uses open web programming standards, such as JavaScript, HTML 5.0 and Ajax, to enable developers to use existing skills to create products for the terminal. It enables the development, test and deployment of apps using just the handset itself, without needing it to be connected to an enterprise PBX or switch, which is intended to make it “more accessible to a larger development community.” The company is “encouraging” developers to create products targeting specific use cases and industries, such as “financial services, travel and hospitality.” It suggested that for the hospitality industry, apps could be created which enable guest services to be controlled from the terminal, including room climate controls and entertainment options.

Support will be provided by the Alcatel-Lucent Application Partner Program, which will also enable programmers to create projects that can be viewed by others, “allowing developers to get visibility in the enterprise market.” The company says that “end users benefit from this creative and innovative environment that generates unique as well as practical applications.” It claims that “over 300” developers have signed-up and are already starting open-source projects.