Apple’s latest iPads generated 4 percent of all iOS tablet sessions for apps tracked by analytics firm Localytics, following the launch of the devices in early November 2012.

According to the company, 2 percent of sessions during the month were attributable to the iPad Mini, with another 2 percent generated by the fourth-generation 10-inch iPad.

The single most popular Apple tablet is the iPad 2, which accounts for more than half (53 percent) of sessions.

On the smartphone side, the iPhone 4S remains the most popular device, accounting for 42 percent of sessions seen by apps using Localytics’ tools.

The iPhone 5, launched in September 2012 in much of the world, and currently seeing a wider global rollout, accounts for 12 percent – putting it in third place, behind the iPhone 4S and iPhone 4.

According to Localytics, while iPad users spend more time using apps than iPhone owners – “not surprising, given the more on-the-go nature of smartphones versus tablets” – users of older devices also spend more time per session than users of new ones.

Based on its November 2012 session analysis, owners of the original iPad spend 392 seconds in an average app session, compared with 263 seconds for users of the iPad 2 – and just 232 seconds for the iPad Mini.

When looking at sessions per user – which needs to be considered alongside session length when monitoring engagement – iPhone users launch “significantly more” sessions than iPad users. This, alongside the shorter sessions, indicates a more casual app use for the smartphone owners.

iPhone 3GS users started an average of 13.1 sessions, compared to 15.9 for the iPhone 4 and 13.7 for the iPhone 5 – meaning that by this metric, older device owners are not more active than owners of more recent smartphones.

With the fourth-generation iPad and the iPad Mini entering the market on the same day – and taking into account that unlike older products, the new tablets may not have seen a full month of usage – it was suggested that the higher session per use metric for the smaller device “may imply that its smaller form factor makes its usage closer to that of a smartphone”. 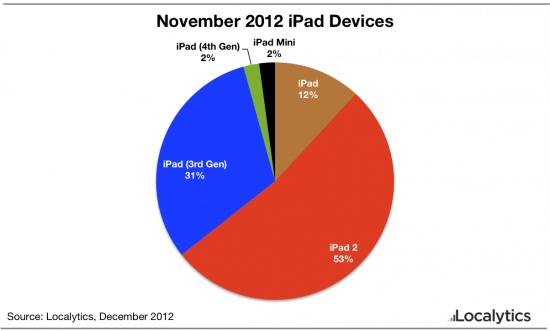 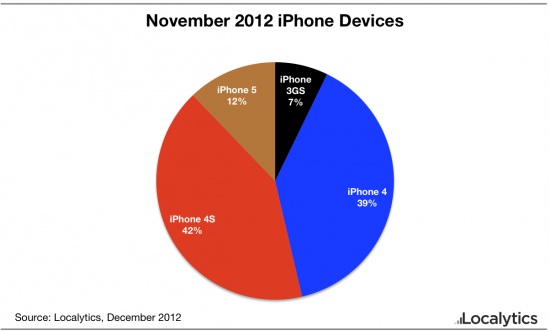