Google Play’s share of combined Play/Apple App Store revenue increased from 25 per cent to 35 per cent in the last six months, as growth for the Android store contrasted to stability for its older rival.

According to research from Distimo, revenue for the two stores combined increased by 17 per cent from March 2013 to August 2013. However, the aggregated revenue of the App Store was stable, whereas Google Play sales drove growth with an increase of 61 per cent.

Month-on-month, the top 10 biggest markets remained the same, with growth seen across the board. The US is “still the big spender in the app market overall”, followed by Japan and South Korea. China is ranked fifth, despite paid content not being available from Google Play.

It was also noted that after the top three markets, Germany was the fourth biggest revenue generator for Google Play. The UK performs well for iOS.

Distimo’s global analysis takes into account performance across 34 countries, where revenue is generated by both stores. 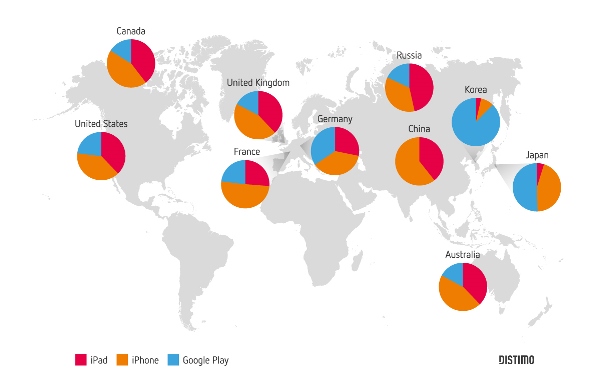 In terms of free apps for iOS, the study found that August 2013 “continued to be a good month for Gameloft’s Despicable Me: Minion Rush”, alongside a continued strong performance for King’s Candy Crush Saga. PopCap’s Plants vs Zombies 2 was a “close third”, having been featured in the App Store’s “New & Noteworthy” category – which paid off in terms of download volumes.

For Google Play, Distimo said that the top free apps were Facebook and WhatsApp Messenger, with Candy Crush being the only top title in common with the App Store. It was also noted that Despicable Me: Minion Rush was “only a short visitor” to the top Google Play charts, having now dropped out of the top five (it is seventh).

But Despicable Me: Minion Rush was the number one title in Amazon’s Appstore.

Across the three, Distimo noted that “the free app charts of all stores show that also non-game apps have the potential to enter the top five”.

For paid iOS apps, the top spot was held by Minecraft – Pocket Edition from Mojang, followed by Asphalt 8: Airborne by Gameloft – with the latter being a new release during August 2013. Distimo noted that the shift of WhatsApp Messenger to a free download model enabled other titles to move up the list.

And for the Amazon Appstore, again Minecraft – Pocket Edition was in top spot, followed by Kindle Tablet editions of Plants vs Zombies (PopCap) and several Disney titles. It was noted that four of the top ten, and 25 per cent of the top 100 Amazon apps, were Kindle-specific.

Distimo said that the result “clearly identifies Mojang as a top publisher”, as Minecraft – Pocket Edition “showed continuously a strong cross-store presence in the top positions of the paid charts”.

In the App Store, the top grossing battle continued to be played out between King’s Candy Crush Saga and Supercell’s Clash of the Clans – with the latter taking the top spot in August 2013. After the US, Japan was a big revenue generator for Clash of the Clans, with localisation of the title for this market (and a feature in the “What’s Hot” listing in Japan) contributing to the success.

For Google Play, Candy Crush Saga was in top spot, followed by Puzzle & Dragons from GungHoOnlineEntertainment and LINE Pokopang from LINE.

Distimo noted that “the top grossing apps across the Apple App Store and Google Play did not have much in common in the month of August”, with Candy Crush Saga and the Japanese incarnation of Puzzle & Dragons being the only successful titles across the board.

It was also observed that the top grossing apps chart is dominated by games.

Facebook was the number one free publisher for Google Play, followed by Google – although in this case Google Translate was the driver, with Maps and YouTube generally pre-installed on Android devices. Google’s success came at the expense of LINE and Gameloft, which fell down the list.

Things were different for the Amazon App Store, where 6677g was in top spot, ahead of Gameloft and TabTale. Distimo said that there were some common trends followed by the top developers: 6677g “mainly features salon-like apps targeting girls as well as casual doctor games”, while TabTale and fifth placed LiBii benefitted from “casual doctor games and salon-like girl apps”.

For paid apps, Disney remained in the top five of each store, with Gameloft performing well with its Asphalt racing games.