Games were the most downloaded apps across the iPhone (33 per cent), iPad (48 per cent), from Google Play (37 per cent) and the Amazon Appstore (a “remarkable” 63 per cent) in 2013, according to a study from Distimo.

But – as usual – it was Apple’s App Store which led the way in revenue terms when compared to Google Play, generating 63 per cent of the total across the two stores (and of which 92 per cent came from in-app purchases).

While games has long been the most popular category for apps, Distimo still noted that the share of revenue generated by these apps in the App Store and Google Play combined still increased between September 2012 and September 2013.

In September last year, games accounted for 64 per cent of the combined total. Twelve months later, this had increased to 77 per cent.

Distimo noted that keeping in mind that revenue in all stores increased over the period, “you can imagine that there is a large opportunity for game developers to be profitable in the app stores”. 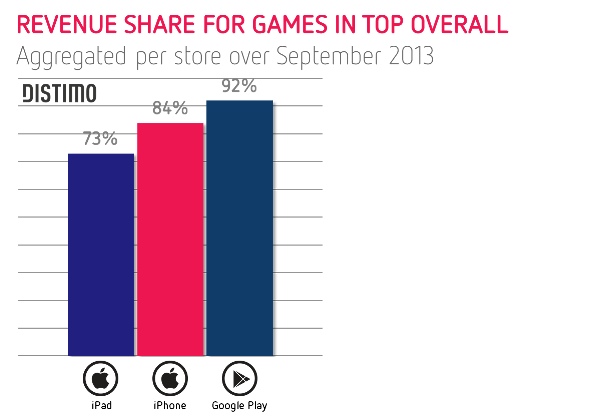 Geographic differences
Of course, there are some differences when it comes to specific markets. Taiwan led the pack in terms of revenue generated by games across the Apple and Google stores, accounting for 89 per cent of the Google Play and 84 per cent of the App Store totals.

Interestingly, this market has had something of a chequered history when it comes to availability of paid-for content, with Google having fallen foul of the authorities with regard to e-commerce regulations.

Second in the combined ranking was South Korea, which again has had a mixed past: the government banned the games category until November 2011, due to rating issues.

At the other end of the scale was Germany, with Distimo noting that “Germans preferred to never risk getting lost, as navigation apps were significantly more popular in Germany than other countries”.

In general, Asian markets had higher revenue share for games than their European counterparts. 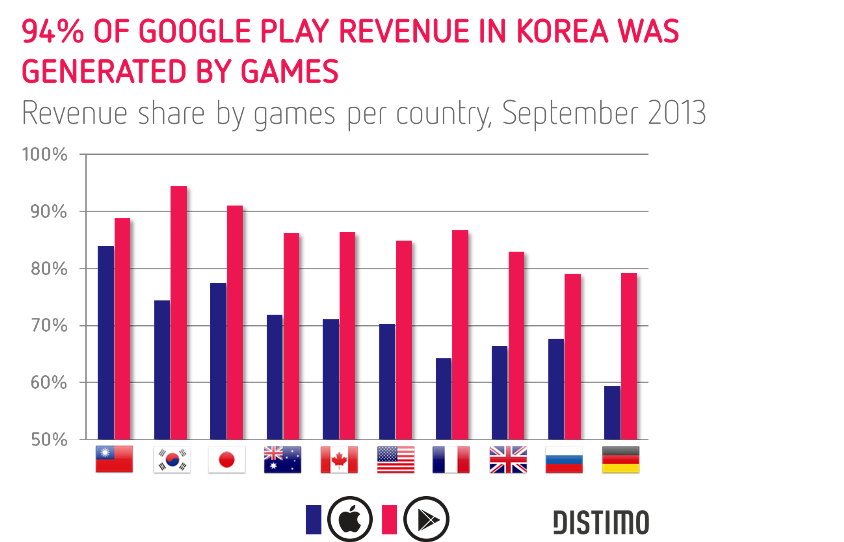 Genre split
While this takes the Games category as a single entity, there were differences between the different types of titles within this.

In the Apple App Store, role-playing games generated the largest share of the revenue (14 per cent), led by Game of War – Fire Age by Machine Zone. This was closely followed by strategy games (Clash of Clans by Supercell taking top spot) and action.

For Google Play, arcade & action took the top spot, followed by casual, and brain & puzzle. Distimo noted that the high number of localised Asian apps that dominated various genres in revenue terms is “remarkable”, including big-earning titles from South Korea and Japan.