Android games with a large number of impressions — through high player retention and/or frequent usage — are best suited to advertising-based monetisation, while those with small but loyal audiences generate revenue most effectively through in-app purchases.

That’s according to analyst firm Flurry, which analysed 1,382 games to determine what monetisation approaches work best for different game genres.

Quadrant I showed genres with a 30-day retention rate of more than 30 per cent and exceeding 10 plays per week. These ‘evergreen’ genres in which players are highly engaged over a long period of time are easy to play and repeatable.

Solitaire was shown to have the greatest retention rate (50 per cent) while turn-based games had the highest sessions per week — which Flurry attributed to their social nature and the fact that many games in this genre require players to return within a certain time period to gain a reward.

The genres in this quadrant — which also include brain/quiz and casino/poker — are most amenable to advertising due to their ability to provide a high number of impressions through high usage and retention rates. 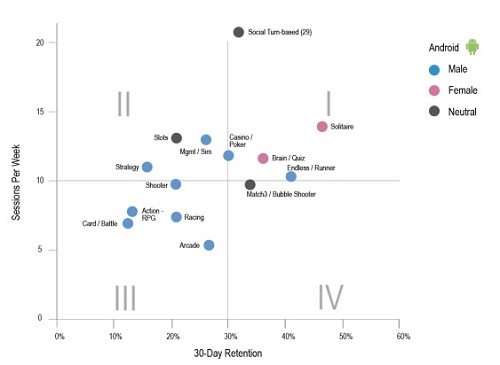 According to Flurry, these kinds of games see up to 90 per cent of their revenue generated through advertising.

Flurry also noted that the high retention levels of these games provide opportunities for re-engagement marketing, while they are also well-suited to promoting other titles which have a higher ARPU.

Quadrant II in Flurry’s retention/usage graph includes genres with 30-day retention rates of less than 30 per cent but usage of more than 10 sessions per week. The genres of management/simulation, slots and strategy fall into this category.

Flurry asserts that users who continue to play these apps will be highly engaged and willing to pay for content and capabilities, meaning in-app purchases will work well. For players that won’t pay, rewarded video ads provide a means for them to gain currency to become more engaged.

Developers should exploit the intense use of these apps by providing new content early and often “as players won’t stick around for improvements”, the analyst firm said.

Quadrant III shows genres with 30-day retention rates of less than 30 per cent with fewer than 10 sessions per week. Arcade, racing, shooter, action-RPG and card/battle genres fall into this category.

Flurry said these genres have the “pickiest” audiences, meaning developers must maximise revenue soon after they have been installed.

Players that remain will pay for content, meaning in-app purchases and rewarded video ads will provide monetisation opportunities. Interstitial ads that aren’t too disruptive will also work well for these genres.

For genres in the Quadrant IV (30-day retention of more than 30 per cent but fewer than 10 sessions per week), Flurry advises developers to lean towards advertising due to the high number of impressions.

Flurry also looked at the same genres in terms of gender and average age of player.

Most Android games tend to be strongest with males under the age of 35, with solitaire and slots the only two genres with a more middle-aged audience 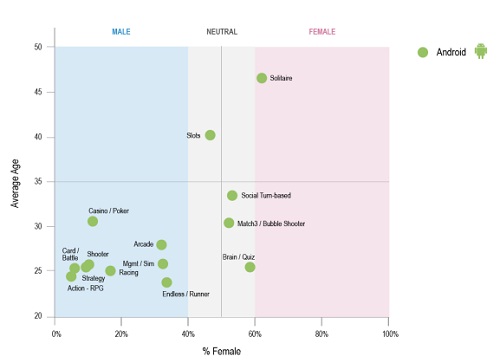 Google brings RCS to Android in the US