Having apps ‘featured’ in the App Store could be hugely beneficial for downloads and revenue but isn’t a guaranteed way to find success, according to the latest report from Distimo.

The US App Store feature categories that had the biggest impact on listed titles in March were Amazing Puzzlers for $0.99 (with download growth of more than 500 per cent), followed by If You Like… Badland, Backyard Battles, Band in Your Hand and Spring Forward.

Looking at Backyard Battles in more depth, Distimo found that featured apps saw downloads increase an average of more than 300 per cent, with free-to-download ‘Backyard Monsters: Unleashed’ getting a 727 per cent boost, compared to the week prior to being featured. 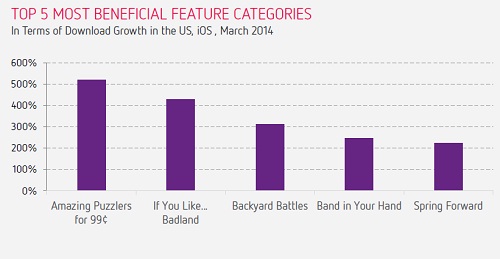 As well as seeing a spike while featured, the effect for ‘Backyard Monsters: Unleashed’ continued once it was no longer listed under the category, with the average download level 53 per cent above that seen before it was featured.

In terms of revenue, apps featured in Amazing Puzzlers for $0.99 saw growth of more than 400 per cent in March, with ‘If You Like… Badland’, ‘Burly Brawlers’, ‘Band in Your Hand’ and ‘Interactive Stories for Kids’ the next best in terms of boosting revenue.

‘Shark Dash’, which featured in the Amazing Puzzlers category, saw revenue that was nine times higher than the seven day period prior to it being featured.

Just a few of the titles that enjoyed a revenue increase during their featured period saw this continue after they dropped out of the category. ‘Smash Bandits Racing’, featured in the 10 Amazing Racing games category, saw revenue that was on average 2.5 times higher than the week before it was listed.

The ‘If You Like…’ series (for Badland, Candy Crush Saga, Minecraft and The Room) all ran for a single week during March, and had a significant impact on downloads.

Excluding the game they were associated with, apps featured in ‘If You Like… Badland’ saw an average growth in downloads of 395 per cent, followed by Candy Crush with 279 per cent, The Room (255 per cent) and Minecraft (175 per cent).

Most spectacularly, Puzzle Craft, featured in the ‘If You Like… Candy Crush’ category in the week of 14-20 February, saw downloads grow by 1,326 per cent.

Overall it seems being featured has more of an impact on downloads than revenue, which in turn suggests it has a greater impact on free apps compared to paid apps.

Not all feature categories are equal
Although there were a number of App Store categories that significantly boosted listed titles, there were a few that didn’t appear to have an impact on download or revenue, including Essentials: 10 Incredible Indie Games and Indie Game Showcase.

For the categories that showed no uplift, Distimo suggested many of the featured games were paid titles, which only see a minor affect when listed. This is because downloading paid apps have a greater financial implication for consumers than free apps which they download with less consideration.

Showing the difference between categories, ‘Superbrothers: Sword and Sworcery EP’ saw a significant revenue uplift from being featured in Spectacular Stories: Games for a week in March, but saw almost no benefit from appearing in Essentials: 10 Incredible Indie Games later in the same month. 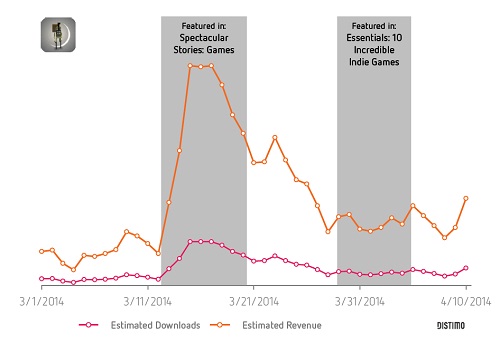 The apps listed in permanent categories differed considerably between countries and devices, which was likely to be related to the number of apps that appeared in categories and the speed at which they changed.

For instance, Distimo found that in the US, more apps were featured for a shorter amount of time when compared to Japan.

During March, 108 titles featured in the Best New Apps section in the US compared to 73 in Japan. The average number of days apps in this category were featured was eight in the US and 13 for Japan.

Looking at the Best New Games section, the US saw 107 games featured in March versus 64 in Japan, with the average number of days games featured at just six in the US, and 11 in Japan.

However, some permanent categories hardly saw any rotation of titles, for example the ‘New to the App Store’ category.

Special occasion categories are created to emphasise a certain genre or event, such as the Kids’ Choice Awards 2014, ‘Back to School’, ‘Microsoft Office’ or ‘If You Like…Badland’.

Some categories of this type exist for a long time, such as ‘Sweets & Treats’ in Japan, which was operating for 49 days. Others can last a single day, for example, ‘Essentials: 10 Amazing Racing Games’ in the US.

The number of apps listed also varies. ‘Microsoft Office’ simply featured the four Microsoft productivity apps, while ‘Get in Shape’ featured 119 apps in the US.