Some 92 of the top 100 best global brands as recognised by Interbrand were represented in Apple’s App Store, with 75 present in Google Play, according to a study conducted by Distimo and covering October 2013.

In Amazon’s Appstore, however, only 28 brands from the top 100 appeared.

The app analytics firm noted in October 2012 that 88 of the top global brands were present in the App Store, indicating that while brand apps are not new, the trend is still upward—and Apple is still the platform of choice.

Distimo said that the most noticeable difference across stores now is the presence of luxury brands in the App Store, such as Cartier, Hermes, Porsche, Prada and Smirnoff, which were absent from Google Play.

And on Amazon’s Appstore, where brands were least represented, most brand apps came from technology, business services, electronics and media sectors, with the least common being automotive, fast moving consumer goods (FMCG) and luxury.

It was noted that brands have different reasons for publishing a mobile app, including improving reach with users, increasing engagement, and offering extra services and incentives.

Of the brands who had not embraced apps, Distimo categorised these as coming from the FMCG and drink sectors, including Corona and Gillette.

The brands with the most apps across the three stores were Disney and Sony.

The three most downloaded apps from the top brands in Apple’s App Store were somewhat unsurprising – YouTube, Facebook and Google Maps.

The top brands were Google, Apple, Disney and Facebook. This, Distimo said, makes the top brands the same as in its publication last year.

A total of 317 apps from the 27 top global brands generated revenue in the Apple App Store in October, with Apple’s Pages word processor the most lucrative.

Apps from Apple and Disney performed well in revenue terms, with other revenue-generating brands including MTV and Thomson Reuters.

Facebook also performed well in Google Play, with both its core app and Facebook Messenger, ahead of Adobe Reader. Other top performers include Google, Disney and eBay.

Apps from Disney, Samsung and Adobe dominated the top 10 on the global Google Play top revenue chart. Nemo’s Reef by Disney even held the number one spot.

In total, 109 apps from ten different global brands “made some or a lot of revenue” from the Android store during the month.

In the Amazon Appstore, Disney was the leading brand, with six of its titles in the top ten global free download chart.

Unsurprisingly, this meant that Disney also had the most downloads, although other brands represented in the global top free download charts included Facebook, Adobe, eBay and Amazon.

Automotive was described as being among the more “standout” sectors. It accounted for 1.4 per cent of downloads, but, “surprisingly”, apps were published in various categories including games, navigation and lifestyle.

Examples include RoadMovies from Honda in the photo and video category, K-Racer from Kia in racing games, and BMW Remote in the travel genre.

The apps with the most downloads from brand/sectors come from service-oriented businesses. 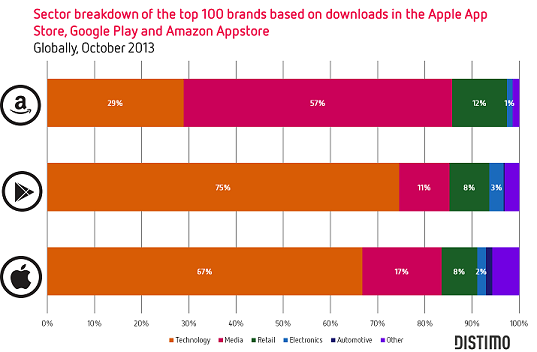