As expected, Apple has launched a new iPhone model tackling the smartphone midmarket – the 5C – in an effort to expand its customer base and also unveiled the iPhone 5S (pictured, above), its new flagship smartphone boasting fingerprint ID technology.

The other big news from today’s event in Cupertino was the support from Japan’s largest operator NTT Docomo, and immediate availability of both new products in China – the world’s largest mobile market (although there is still no news on when China Mobile will officially offer the iPhone).

What was missing from the event was any update on the firm’s TV strategy, a move into the wearable market (such as an “iWatch”) or support of NFC technology (it seems that Touch ID fingerprint technology is Apple’s favoured one-touch commerce solution).

Kicking things off, Apple CEO Tim Cook took to the stage declaring that the firm will ship its 700 millionth iOS device next month (by contrast, Google last week said Android has reached 1 billion activations) and talked up the new features of iOS7, which will be available for free download on September 18. “Downloading iOS 7 is like getting an all new phone that you already know how to use,” added Craig Federighi, Apple’s SVP of Software Engineering.

Cook then moved onto the two main announcements of the event. “In the past, we’ve lowered the price of the current iPhone, making it accessible to more people. This year, we’re not going to do that,” he explained. “The business has become so large, so this year we’re going to replace the iPhone 5. This allows us to serve even more customers.” 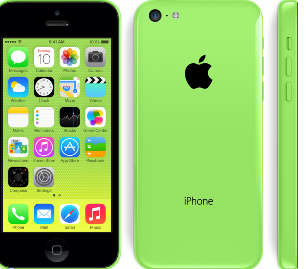 The 5C will retail at $99 for the 16GB model and $199 for the 32GB model, both on a two-year contract. Pre-orders are available Friday September 13, with device availability due a week later. Despite the apparent low-cost, observers were quick to point out that this is not a “cheap” iPhone; without the contract the value of the device is $549 or $649.

What’s important here, though, is Apple’s decision to address a new market. “The iPhone 5C is the first time Apple has built a fresh handset design for a mid smartphone market segment,” commented Ian Fogg, analyst at IHS Screen Digest. “By using a visibly different design for the iPhone 5C, rather than re-purpose an old flagship, Apple is minimising the risk of cannibalisation of its more expensive iPhone models.”

Turning to the new iPhone 5S, Apple’s Schiller hailed it as “the most forward-thinking phone we’ve ever created.” New tech features include the A7 chip, which Schiller claimed makes the device “the world’s first smartphone with 64-bit desktop-class architecture for blazing fast performance in the palm of your hand.” The device claims to be 56 times faster than the original iPhone and features Touch ID, fingerprint sensor technology that is used to unlock the smartphone. Apple was keen to stress that all fingerprint information is encrypted and stored securely inside the A7 chip on the iPhone 5S; “it’s never stored on Apple servers or backed up to iCloud,” stated Schiller. Touch ID can also be used as a secure way to approve purchases from the iTunes Store, App Store or iBooks Store.

Featuring an aluminium body and 4-inch Retina display, the LTE-capable iPhone 5S is available in gold, silver and ‘space grey’ (black). It claims to offer 10 hours of talk time on 3G networks, up to 10 hours of web browsing on Wi-Fi and LTE networks and up to 8 hours on 3G networks. It will retail for $199 for the 16GB model, $299 for the 32GB model and $399 for the 64GB model. The 5S will be available from Friday September 20.

Jony Ive waxed lyrical on the device: “It’s meticulously designed and crafted.” And, in an apparent dig at Samsung’s recent efforts, he added: “It’s not just rampant tech for tech’s sake. Every component and process has been considered and measured to make sure it’s truly useful and enhances the user experience.”

Analysts were quick to offer their opinion on what is arguably the most high-profile device launch of the year. “Clearly there’s little need for gimmicks in the flagship 5S, in a launch replete with significant spec upgrades over and beyond the usual screen improvements,” commented Tony Cripps, principal device analyst at Ovum. “Apple is certainly offering meaningful innovation here. Moving to a 64-bit architecture means Apple can genuinely claim to have brought something new to the smartphone party. It should certainly help the company further cement its lead as a mobile gaming platform and will give the Android fraternity something to think about in a space whose significance is sometimes downplayed beyond the gaming world.”

Of note, following launch of the two new devices Apple will offer an 8GB version of the iPhone 4S for free (on a contract).

Finally, it was announced that Japanese operator giant NTT Docomo has agreed a deal to stock the new products (the two firms have been at loggerheads for months over terms and conditions surrounding an iPhone deal).  It is also expected that tomorrow will see confirmation for the first time from China Mobile – the world’s largest operator – that it too will support the devices (China Telecom and China Unicom are longtime iPhone stockists).

Today’s developments are regarded by analysts as necessary for Apple’s success in the mobile handset market in 2013 but they may not be sufficient for the longer term. “Apple will need to innovate significantly in 2014 with both improved software and new iPhone hardware to counter the growing threat from Android smartphones and ensure that Apple’s mobile success continues,” warned IHS’ Fogg.