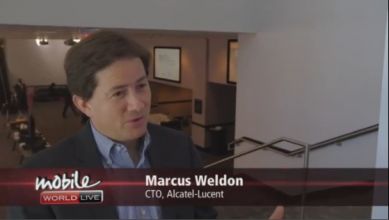 VIDEO INTERVIEW: Marcus Weldon, Alcatel-Lucent CTO and president of Bell Labs – Alcatel-Lucent’s R&D arm – sees a new wave of “healthy competition” between macro and small cell suppliers, but describes alternative solutions for network coverage, such as drones and balloons, as “not real infrastructure”.

At the macro level, Weldon thinks there’s little room for vendor consolidation. “We’re down to only four major macro providers, so we’re almost at the limit of what can reasonably serve a global market,” he told Mobile World Live in a recent interview.

With the advent of ‘hetnets’, however, which include a small cell underlay, the Alcatel-Lucent CTO sees much more supplier-side disruption, particularly as small cells are integral to LTE specifications.

“[Hetnets] have created an insurgent or new-entrant dynamic into an otherwise stable market,” said Weldon. “I think there’s a healthy amount of competition between macro and small cell providers, giving rise to a good amount of new investment and new energy.”

When asked about drones and balloons – technologies touted by the likes of Facebook and Google as ways to extend internet connectivity into hard-to-reach places – Weldon said they contained “fascinating research ideas” but were much more of a “band aid solution” rather than a way to deploy large-scale and permanent infrastructure.

“Real infrastructure is essentially deployed on base stations, towers and small cells, which are attached to real backhaul and real power,” said Weldon. “[Technology] has to have permanent characteristics to be legitimate infrastructure as opposed to niche infrastructure.”

The Alcatel-Lucent CTO could, however, see some uses for a “transient infrastructure” in emergency events. He recalled how helicopters were used to carry base stations after Hurricane Katrina hit New Orleans.

Weldon’s overall view is similar to that of Ulf Ewaldsson, CTO of Alcatel-Lucent’s major rival Ericsson. Earlier this year Ewaldsson told Mobile World Live that talk of balloons and drones for providing widespread mobile network coverage was more “fantasy” than reality. Of course, both companies have a vested interest in ensuring operators use their own macro network equipment for coverage.

Looking to the future, Weldon, unlike at least one Bell Labs colleague, does not see 5G as a revolutionary jump from the current crop of LTE networks. “5G, in my view, is as an evolution from LTE-Advanced with some new frequency bands and new technologies,” he said.

Weldon combines his CTO role with being president of Bell Labs, a post he has held for nearly 12 months. He thinks it’s a good combination. “The CTO’s job is to see the future of the industry, but then you need someone to actually solve for that future,” said Weldon. “That is what Bell Labs does. Aligning those two roles has caused a re-energising and rejuvenation of Bell Labs.”

Weldon said that when he arrived at Bell Labs they were “lacking just a little bit of direction”. (In a previous meeting with a small group of journalists, Weldon said the trend towards blending service provider and IT elements, such as NFV and SDN, gave a welcome clarity of vision on where Bell Labs should be channeling innovation efforts.)

When it comes to luring clever innovators and thinkers, Weldon said Bell Labs tended to attract different types of people compared to big-name internet players. “Google and Facebook perhaps focus on fast returns on investment.” he said. “They have a single-minded determination to solve one problem and commercialise it fast with perhaps transient, but non-optimal, answers. Bell Labs’ strength is solving any problem, with diverse viewpoints, and taking the time to do it right. People who are interested in making a long-term impact on the industry come to us. Those who want transient success go on to other companies.”

Previous ArticleFrench govt looks to raise cash but Orange stake not on the block
Next ArticleInterview: Syniverse CMO